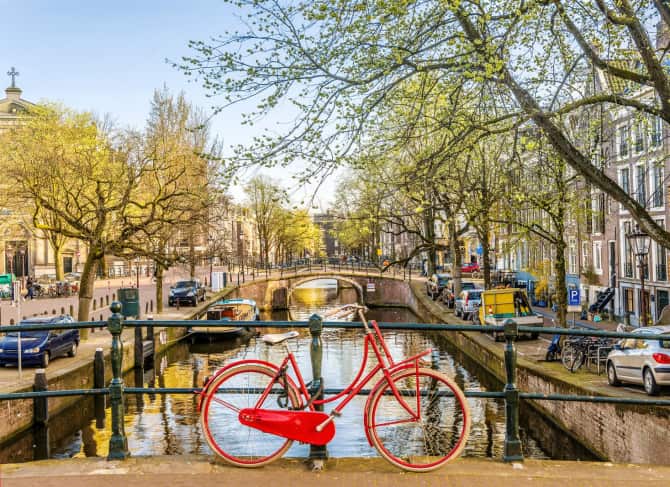 Take the ferry from Amsterdam Central Station and across on the Pontplein in Amsterdam-North. Cycle from the IJ along the picturesque dykes of Nieuwendam and Durgerdam. Follow the signs to Ransdorp and go back via Holysloot and Zunderdorp. Sniff the fresh polder air and enjoy the beautiful waterland. You end your bike tour around Amsterdam on the Buiksloterweg.

Bike trails: along the Amstel

During the Amstel cycle route you follow the casual criss-cross movements of the river all the way, while you drive past beautiful farmhouses, old mills and the cutest house. Follow the “De Rond de Amstel route” which starts at cycle junction 61 “Oranjebaan”. After that it’s a matter of following the nodes, the rest is self-explanatory!

This cycling route is certainly suitable if you like buildings and monumental buildings. The Oosterdok is a water in Amsterdam and it originated in 1832 when the construction of the Oosterdoksdam separated this part of the IJ. To decongest Amsterdam’s town center, the municipality gave planning permission to several important cultural initiatives leading to buildings such as NEMO, ARCAM, Muziekgebouw aan ’t IJ & OBA Amsterdam (a ultra-modern library).

Amsterdam Nieuw west is a large part of Amsterdam. However, it is not the first place people think of when they cycle through Amsterdam and that’s a pitty! From the center you can follow a varied cycle route via the Westerpark in the direction of New West. On the route there are plenty of places worth seeing: the Westergasfabriek, the beach on Sloterplas, Dorp Sloten and De Oeverlanden. Starting point of your cycle route through this part of Amsterdam is Haarlemmerplein!

Want to discover the Dubai of Amsterdam? Head up to IJburg! This part of the city has a stunning architecture and is located in the East of Amsterdam. The area, which is built upon completely artificial ground, was a solution for Amsterdam’s housing crisis. IJburg has a unique layout which you do not find elsewhere in Amsterdam! That’s definitely worth a visit! Start from the East of Amsterdam and cycle to IJburg over the Nesciobrug (Nesciobridge) which connects the two!

*in the summer you can have a swim at the IJburg beach!

Bike route through the Amsterdamse bos

You can also cycle nicely in the Amsterdamse Bos. From Amsterdam CS you can be there within half an hour. At the entrance to the Boswinkel, choose one of the many Amsterdam cycle routes along the more than 50 km of cycle paths in the forest. If you follow the red posts, then you have those of 14 km.