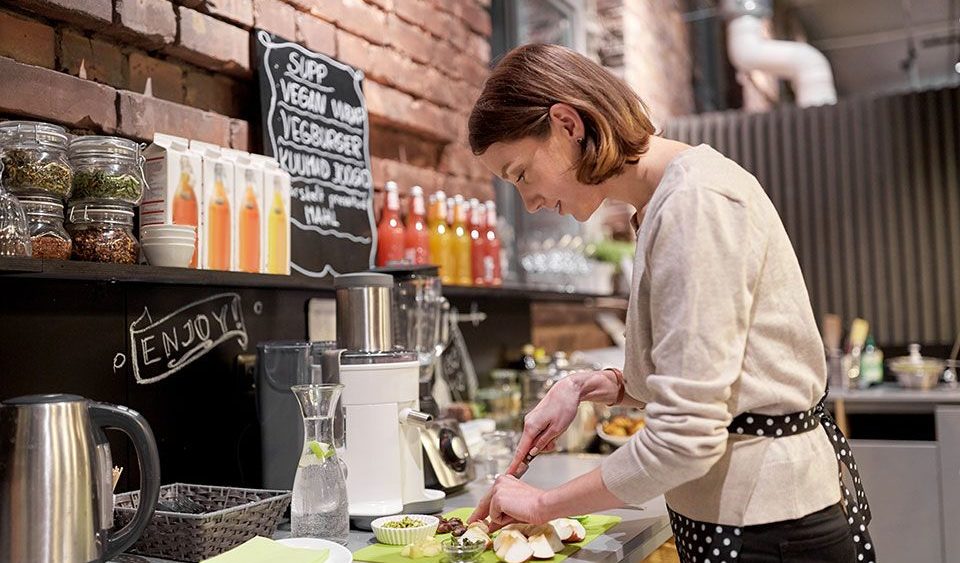 The vegan also likes to enjoy some junk food sometimes. A hamburger or a nice kapsalon every now and then. The local vegan snack bar is so successful it now has 4 (!) locations in Amsterdam! VJFB Eastside in the Eerste Van Swinden straat, VJFB De Pijp on the Marie Heinekenplein, VJFB West on the Staringplein and  VJFB at Reguliersdwarsstraat 57. Next to their famous kapsalon VJFB also serves vegan sashimi: raw ‘salmon’ and ‘tuna’ made from dried cassava root.

Vegabond makes the tastiest vegan sweets. From the perfect vegan brownies and cupcakes to delicious açai bowls and vegan snickers. A lovely place to relax with a cup of coffee and a piece of cake.

At Mr. Stacks you will not find thin banana pancakes with some banana and blueberries. In this breakfast and lunch restaurant in de Pijp they like stacking. The plant-based pancakes are small in size, but thick and firm and overloaded with, for example, chocolate and fresh fruit, cinnamon and vegan cream or jackfruit with mashed avocado.

At Bonboon in Amsterdam North, you can go for a three-course menu, where you have a choice of three dishes with each course. Such as a sweet potato soup, Middle Eastern eggplant and a tiramisu as a dessert, TASTY!

Heart is concept store where you can also score a vegetarian dish, and all of that on a swing.

At Meatless District they have sweet potato fries that will make you mouth water – not baked in the oven, but crunchy fried – and gluten-free buns. Another highlight on the menu: the new mason jar salad, filled with lots of vegetables and some cereals.