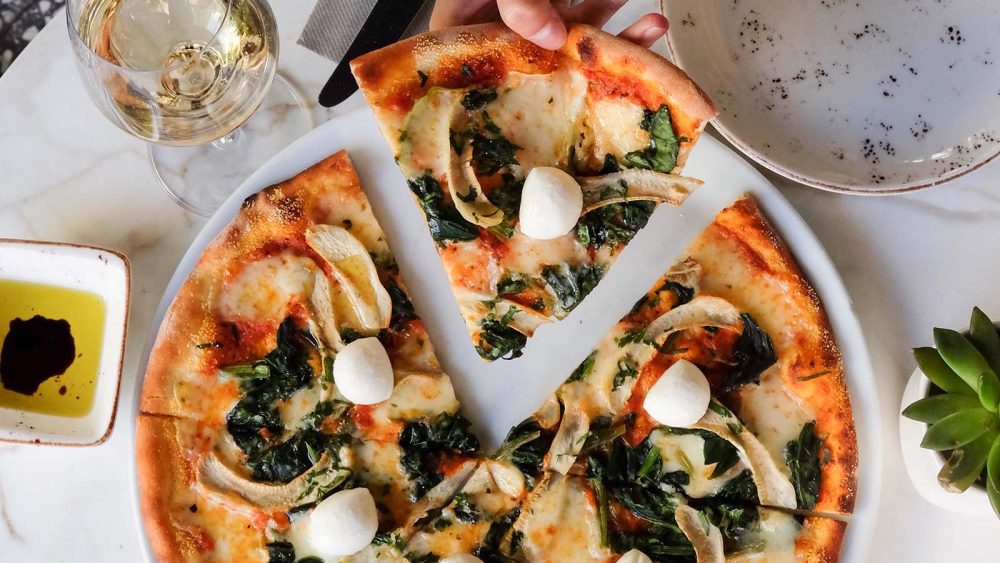 9 pizza restaurants in the city

Pizza in Amsterdam, there is plenty of choice. But if you want real Italian pizza in a cozy restaurant, these are the pizzerias you should go to!

In 2016, La Perla, got a high score in the competition of best pizza in Amsterdam. The pizzas were rated with a 9. There is no other way. The pizzas here taste delicious! Opt for a delicious pizza with a crispy crust and extremely high-quality ingredients. We are sure you will love it!

Sotto, a small, but cheerful pizzeria, is located on the Roelof Hartstraat and on the Amstelveenseweg near the Vondelpark. The black and white tiles, yellow sofas and plants make this restaurant a place where you can spend the whole day. And then the pizza is also to die for.

It is not a real pizzeria, but at Sous they serve delicious puccia, a kind of small sandwich made of pizza dough. The puccia with parma ham, burrata, arugula and tomato is many’s favorite. And there are real Italians in the kitchen, so you know it’s all right.

Another good pizza bar in East is Loulou. And that is partly because the restaurant won the award for the best pizza in the Netherlands in 2016. Here they serve “the best of both Neapolitan and Roman pizza styles”, with a special “primal base” (or gluten-free base). If you are a truffle lover, definitely choose the tartufo.

The first vegan pizzeria in Amsterdam is called Mastino Vegan Pizza, and can be found in Old-West. Here they not only make their own vegan dough, but also the ingredients come from their own kitchen, such as the vegan cheese. Sweet pizzas are also served here for the real sweet tooth, such as the red velvet pizza. Don’t forget to taste the homemade limoncello.

According to many (if you scroll through the reviews on Google and Trip Advisor) you eat the best pizza in Amsterdam at Renato’s Pizzeria. Here they only use simple, high-quality products from Italy. This way you get that delicious pizza with a crispy crust. Do you prefer pasta? Opposite the pizzeria is Renato’s Osteria, where they serve delicious pastas, among other things. You will also find a branch in the Foodhallen.

Where? At Karel du Jardinstraat 32

Pizza Beppe is the first pizza restaurant in the Netherlands that is allowed in the so-called ‘Associazione Verace Pizza Napoletana’. An official name for an equally official fact, the pizza’s at Pizza Beppe are authentic Napolitan. In the store you will find a large wood oven that bakes every pizza at its crispyest. On the menu of the shop are the well-known pizzas margherita (in different variants), pizzas rosso (such as salame or quattro formaggi) and pizzas bianca (with a white sauce). Definitely worth a visit!

The pizzas at Pizzeria Pastorale on the Haarlemmerstraat are top notch. The atmosphere, the price and the bottom of the pizza are very good. You will therefore not regret eating here!

If you cycle through the Bilderdijkstraat, the nNea restaurant is not to be missed thanks to the bright blue facade. A new generation Neapolitan pizza from ‘perfect fluffy pizza dough’, that is what they serve at nNea. The pizzas are finished with the most special toppings. Take the Van Gogh pizza or go for the Cabo Noord. There are also vegan options on the menu, such as the Quattro Pomodori.