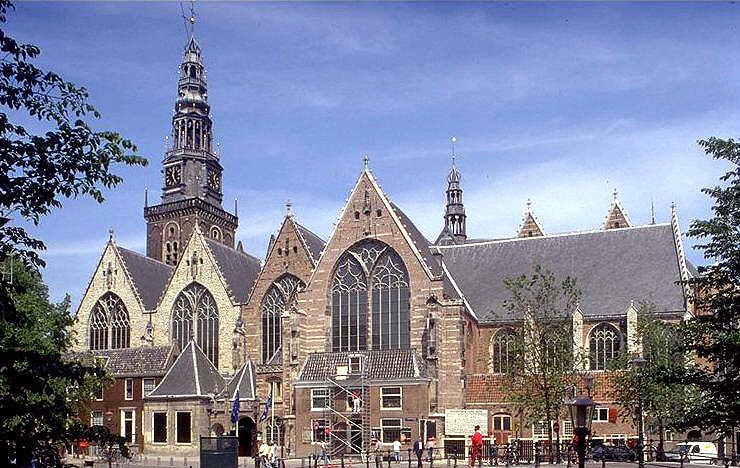 Here’s our selection of 10 lesser-known Amsterdam attractions well worth seeking out on your next visit to the city.

An original Picasso in the Vondelpark

It’s easy to walk right past this concrete sculpture at the southern end of the Vondelpark without realising that it is, in fact, by Picasso himself. Created in 1965 as part of an outdoor sculpture exhibition to mark the 100th anniversary of the Vondelpark, the ‘Figure découpée l’Oiseau’ (‘The Bird’) was donated to Amsterdam by Picasso after the exhibition and has remained in the same spot ever since. Vondelpark, Amsterdam Zuid

Built at a time when people were taxed on the width of their house, meaning that the wider the house, the wealthier its owner, the grand house at Kloveniersburwal 29 is often referred to as the widest house in Amsterdam. In fact, the perfectly symmetrical façade conceals not one but two adjoining, symmetrical houses, built in the early 1600s for the wealthy Trip brothers, who inherited their fortune from arms factories and forges. The famous story goes that when the Trip house was finished, the brothers’ coachman sighed and commented that he would be the happiest of men if only he had a house as wide as their front door. The Trip brothers paid attention to his wish and had a little Trip house built for him across the canal from theirs; a house which can still be seen today. Trippenhuis, Amsterdam Centrum

Look out for the stone carvings depicting weaponry and olive branches; a reference to the Trip brothers’ work in the arms trade

Step back in time to this 18th century herbalists’ shop near Nieuwmarkt, opened in 1743 by a 21-year-old sailor’s son named Jacob Hooy. Harking back to the days when both tobacco and opium were considered remedies for illness, the shop still retains much of its original décor, including barrels, wooden drawers and a magnificent set of scales embellished with two entwined serpents. Jacob Hooy & co, Kloveniersburgwal 12, Amsterdam Centrum

The small barrels were made to measure for the shop in the 1700s, and display the Latin names of the herbs and plants they contained

You’ll often hear that the city of Amsterdam lies below sea level, but it’s not until you see it demonstrated by giant tubes that the reality really hits home. At the NAP visitor centre (NAP stands for Normaal Amsterdams Peil – literally Amsterdam’s normal water level), you can see three glass tubes showing the sea level in different parts of the region – one of them reaching nearly five metres above ground. NAP Visitor Centre, Amsterdam Centrum

The symbolic triangles of the Homomonument

Unveiled in 1987 to commemorate and support homosexual people oppressed by government regimes around the world, this vast, symbolic monument is so well integrated into its surroundings that it’s possible to walk straight through it without even realising it’s there. Laid out on the cobbles of Westermarkt is a 36m equilateral triangle, with three smaller pink granite triangles in its corners. One of the triangles spills out onto the canal and points towards Anne Frank House. Another of the pink triangles (in front of the church) points towards the war memorial at Dam Square, in remembrance of the persecution of homosexuals in WWII. The final triangle points towards the ‘Centre of Culture and Leisure Activities’ (COC Amsterdam), which was the cover name for the Dutch gay and lesbian society founded in 1946. Homomonument, Amsterdam Centrum

An ancient prison under a bridge

Completed in the mid 17th century and measuring around 40 metres in width, the Torensluis (tower lock) is the city’s widest bridge – and one of its oldest. Its vast size – and its name – is down to the tower that originally stood on the site until its demolition in the mid 19th century, the foundations of which are still visible both in the paving of the bridge itself and in the dungeon below.  Look out for the barred windows and arched entrance to the prison cells nestled under the bridge, now open to the public and used to host events and exhibitions. Torensluis, Amsterdam Centrum

The location of the tower that formerly stood on the bridge is marked in the cobbles on the ground. The tower had to be demolished in 1829 due to excessive leaning

Reflective of the 19th century fascination with the exotic and faraway, this row of seven houses was commissioned in the 1890s by wealthy banker and politician Samuel van Eeghen. Inspired by the various building styles of European countries, he had architect Tjeerd Cuipers design him a row of houses representative of seven different countries. The result was a fascinating and eclectic architectural tour of 19th century Europe on one short stretch of Amsterdam street; from the Moorish influences of the Spanish house to the cottage charm of England and the Loire Valley romanticism of the French house. Russia, Italy, Germany and the Netherlands are also included in the tour. Zevenlandenhuizen, Amsterdam Zuid

If you can’t work out which house is which, the country names are displayed above their doors

Little houses set in to the Park Plaza Victoria hotel

When the owners of the Park Plaza Victoria wanted to build their hotel opposite Central Station in the late 19th century, the elderly owner of two tiny 17th century houses dug her clogs in and refused to sell up to make way for the developers. So they simply built the hotel around her. You can still see the little houses, which date from 1602, dwarfed by the grand 4-star hotel that envelops them. Park Plaza Victoria Amsterdam, Amsterdam Centrum

About halfway along the busy Overtoom (near the Vondelpark), you might notice a strange whiff of horses, more to be expected in the countryside than in such a built-up residential area. But follow your nose in the direction of the pastoral smell and you’ll be rewarded by one of the city’s most beautiful and unique spaces; an ornate arena dedicated to all things equestrian. Hidden behind a rather normal façade on Vondelstraat (the Overtoom entrance is actually the back of the building), the interior of this 18th century riding school abounds with decorative Baroque features. There’s even a beautiful café with a balcony overlooking the arena, where visitors can sip tea or coffee while watching the finest horses trot around with their trainers. Entrance is via Vondelstraat 140. Hollandsche Manege, Amsterdam Oud-Zuid

A Buddhist temple in the heart of the old town

Flanked by traditional Dutch buildings in the historical heart of the city, this magnificent Buddhist temple appears even more magical due to its incongruous surroundings. Tucked back slightly from the road behind a grand arched gateway, the golden-tiled temple is like a slice of Shanghai in the heart of Amsterdam. The interior is just as impressive and is open to the public on Saturdays when guided tours are available, some including a meditation session. Buddhist temple Fo Guang Shan, Amsterdam Centrum